Ransomware groups come and go, but the individuals behind them persist in bringing their hacking and extortion skills to bear as part of fresh operations.

See Also: To Pay or Not to Pay? Proven Steps for Ransomware Readiness

Take the aftermath of what were two of the world's most formidable ransomware gangs: REvil and Conti.

REvil - aka Sodinokibi - disappeared in July 2021 after being targeted by multiple law enforcement agencies, briefly spluttered back to life next September and then seemed to be gone for good.

Since then, researchers have spotted at least three apparent REvil spinoffs:

The operators of Conti, meanwhile, retired the brand name in the spring after making a disastrous business decision: They publicly backed Russian President Vladimir Putin's decision to invade Ukraine, leading to a massive falloff in ransom payments to the group. But before retiring the brand, Conti spun off multiple smaller operations using different names (see: Ransomware Ecosystem: Big-Name Brands Becoming a Liability).

It's no surprise that Conti spinoffs have been honing a set of strategies aimed at restoring profit margins. "Through September, it became clear that groups like Quantum, Royal, SilentRansom and other BazarCall collectives became especially dangerous, with a spike in successful attacks," says Yelisey Boguslavskiy, head of research at New York-based threat intelligence firm Advanced Intelligence - aka AdvIntel - in a new report.

In particular, the groups have been adopting and refining BazarCall - previously known as BazaCall - tactics. This is a "callback phishing" methodology that involves attackers telephoning victims, impersonating the technical staff at a software vendor they use, and trying to trick them into giving attackers the ability to install remote-control software on the victim's PC. If successful, attackers use this to install malware and attempt to further penetrate the network.

This practice was pioneered by the Ryuk group in early 2021, before being relaunched in March by Conti, as AdvIntel reported. 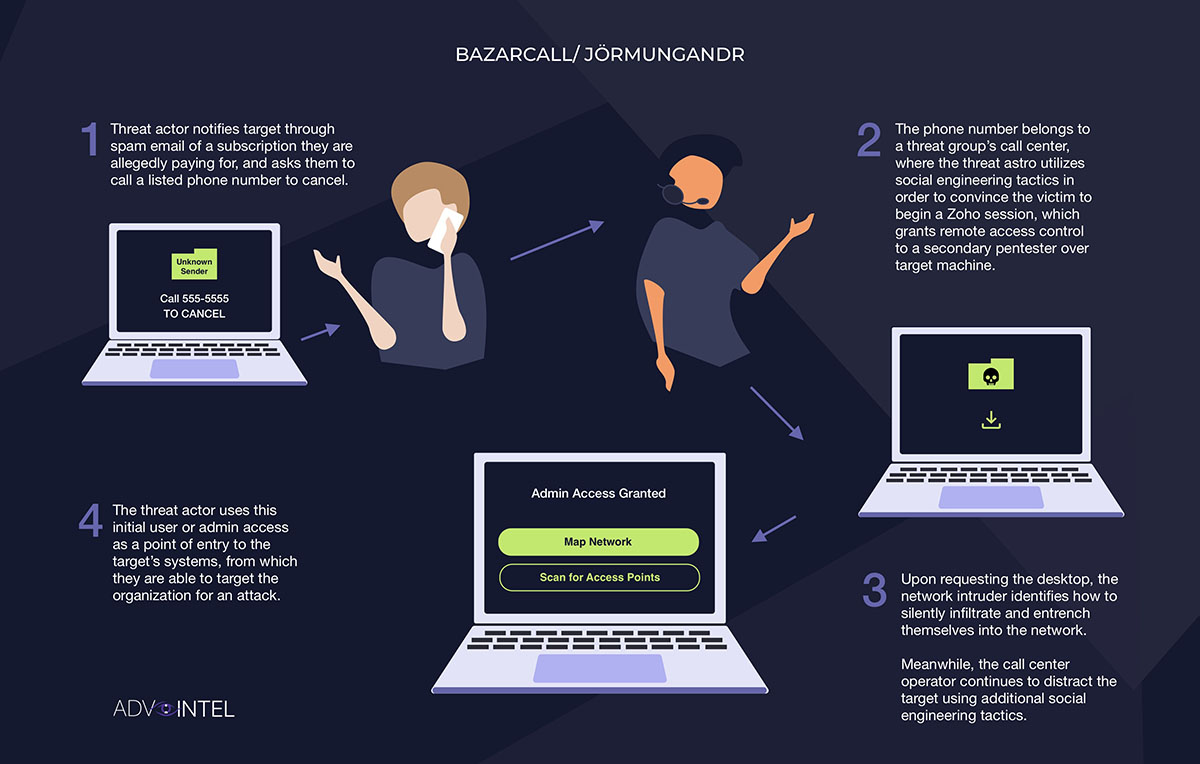 AdvIntel's Boguslavskiy says this is the timeline of how three Conti spinoffs have been using callback phishing:

Callback phishing was developed to enable ransomware operations to hit preselected targets in a cost-effective manner, which they previously were unable to do.

"Traditionally, ransomware has been reactive. Targets are random, decided by which ones happen to fall prey to infection," Boguslavskiy reports.

But this "spray and pray" approach typically results in a low rate of infections. "Hypothetically, a ransomware collective could send out 1,000 Emotet infections that are able to yield access for just 10 organizations," he says. "The collective cannot afford to pick and choose in regards to their victims' revenues, jurisdiction, industry, etc. This cost/benefit ratio was severely limiting the potential of successful ransomware deployment, and therefore potential profit."

Of the groups using callback phishing tactics, Quantum so far appears to be the most successful, due to it taking a more holistic approach by not just focusing on callback phishing, but also refining its malware, building alliances with the IcedID and Emotet botnets to outsource their ability to gain access to endpoints, as well as continuing to use spam to disseminate its malware.

Given the apparent success of these callback phishing tactics, how long until other ransomware operations follow suit?

Are You Using the Best Approach to Catch Digital Identity Fraud?