Barr sent a four-page summary of the report's "principal conclusions" based on his "initial review of the report," to Congress on Sunday. He also publicly released his summary, which selectively quotes a small number of sections from Mueller's report. 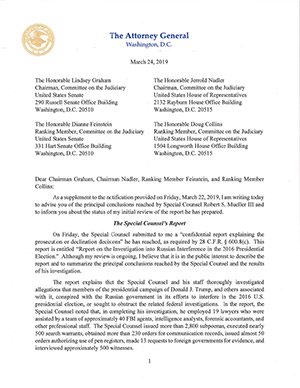 Barr writes that Mueller had sent to him "a 'confidential report explaining the prosecution or declination decisions' he has reached."

Mueller's team has been investigating whether the campaign of President Donald Trump conspired with Moscow. The special counsel also looked at whether the president or others sought to obstruct justice.

To the first point, Mueller's investigation found no evidence that Trump or his team conspired with Moscow, says Barr, who was picked for his position by Trump and confirmed by the Senate in February. He previously served as the U.S. attorney general from 1991 to 1993.

To the second point, however, Mueller's team declined to make a prosecutorial judgment and instead shared evidence with Barr's office. Based on that evidence, Barr says that he and Deputy Attorney General Rod Rosenstein have chosen to not prosecute Trump for obstruction of justice.

The special counsel's office has not obtained any sealed indictments that have yet to be made public, Barr says.

Mueller's investigation led to 34 individuals and three companies being indicted or pleading guilty to a variety of charges, which have included fraud, obstruction of justice and lying to Congress (see Collusion Investigation: 37 Indictments and Counting).

Mueller's report, titled "Report on the Investigation into Russian Interference in the 2016 Presidential Election," is confidential, as stipulated by the law that established how special counsels operate. 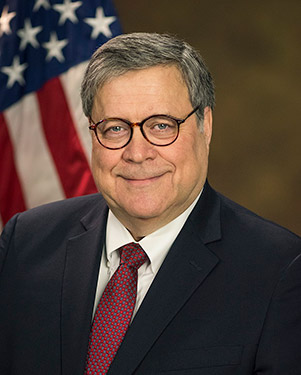 "As I have previously stated, however, I am mindful of the public interest in this matter," Barr said in his summary letter to the leaders of the House and Senate judiciary committees. "For that reason, my goal and intent is to release as much of the special counsel's report as I can consistent with applicable law, regulations and department policies."

Barr says he has requested the special counsel's help in identifying what can be made public. But he noted that grand jury proceedings and other investigative powers may require some information to be withheld. Likewise, Mueller's team referred some matters to other prosecutors, which might necessitate not disclosing details that might impede active investigations or prosecutions.

No Conspiracy or Coordination With Russia

Mueller's report found no evidence that Trump or members of his presidential campaign worked with the Russian government as it conducted two separate campaigns designed to interfere in the 2016 U.S. presidential election, including hacking the Democratic National Committee and leaking stolen emails and documents, in part via WikiLeaks.

"The investigation did not establish that members of the Trump campaign conspired or coordinated with the Russian government in its election interference activities," Mueller's report concludes, Barr directly quotes.

"In assessing potential conspiracy charges, the special counsel also considered whether members of the Trump campaign 'coordinated' with Russian election interference activities," Barr says. He adds that the special counsel defined such coordination as being an "agreement - tacit or express - between the Trump campaign and the Russian government on election interference."

Mueller's report does not conclude whether President Trump did or did not attempt to obstruct justice. Instead, Barr says that Mueller says in the report that after conducting a "thorough factual investigation," he has chosen to list each relevant action as well as evidence on both sides.

Barr states: "The special counsel states that 'while this report does not conclude that the president committed a crime, it also does not exonerate him.'"

Barr says the threshold for prosecuting someone would be proof "beyond a reasonable doubt that a person, acting with corrupt intent, engaged in obstructive conduct with a sufficient nexus to a pending or contemplated proceeding."

Barr says that together with Rosenstein, he has chosen to not pursue Trump on obstruction of justice charges, based on the president's actions, "most of which have been the subject of public reporting."

"The special counsel states that 'while this report does not conclude that the president committed a crime, it also does not exonerate him.'"
— U.S. Attorney General William Barr

Barr writes: "In making this determination, we noted that the special counsel recognized that 'the evidence does not establish that the president was involved in an underlying crime related to Russian election interference,' and that, while not determinative, the absence of such evidence bears upon the president's intent with respect to obstruction."

The Kremlin has declined to comment on Barr's summary or Mueller's report. "We haven't seen the report itself," Dmitry Peskov, a Kremlin spokesman, told the Guardian on Monday. "Hardly anyone has seen it, so we don't have the ability to comment on it in any detail."

Republican lawmakers have seized on Mueller's finding that neither Trump nor his campaign worked with Moscow.

"The special counsel's conclusions confirm the president's account that there was no effort by his campaign to conspire or coordinate with Russia in its efforts to influence the 2016 presidential election," says Senate Majority Leader Mitch McConnell, R-Ky. "However, Russia's ongoing efforts to interfere with our democracy are dangerous and disturbing, and I welcome the special counsel's contributions to our efforts to understand better Russia's activities in this regard."

"There was no collusion," tweeted House Minority Leader Kevin McCarthy, R-Calif. "This case is closed."

After two years, two congressional investigations, and now the closure of a Special Counsel investigation, it is abundantly clear, without a shadow of a doubt, there was no collusion. This case is closed.
My full statement: pic.twitter.com/XiPQZom3Fp

But Democrats have countered that while Mueller's report is clear about collusion, they are concerned by the obstruction of justice questions. They have also called for full access to the report.

Americans deserve the absolute truth. It's time to #ReleaseTheReport. https://t.co/ONvdt5qs47

"The fact that Special Counsel Mueller's report does not exonerate the president on a charge as serious as obstruction of justice demonstrates how urgent it is that the full report and underlying documentation be made public without any further delay," they say. "Given Mr. Barr's public record of bias against the special counsel's inquiry, he is not a neutral observer and is not in a position to make objective determinations about the report."

Trump has responded to Barr's summary by saying that it completely exonerates him.

Speaking at Palm Beach International Airport in Florida on Sunday, Trump branded the two-year Mueller investigation as an "illegal takedown that failed."

The president offered nothing to substantiate what about Mueller's investigation, which his own Department of Justice ordered and which was authorized by Rosenstein, who Trump picked to serve as his administration's deputy attorney general, might be illegal.

"There was no collusion with Russia. There was no obstruction," Trump said. "It was a complete and total exoneration."

But Pelosi and Schumer said Trump's statement that he had been "completely exonerated" was "not to be taken with any degree of credibility."

Rep. Jerry Nadler, D-N.Y., who chairs the House Judiciary Committee, says he will call on Barr to testify before his committee "in the near future."

In light of the very concerning discrepancies and final decision making at the Justice Department following the Special Counsel report, where Mueller did not exonerate the President, we will be calling Attorney General Barr in to testify before @HouseJudiciary in the near future.

The special counsel's investigation by the numbers:

Next Securing Smartphones from Eavesdropping