Mandiant's findings appear in a comprehensive report issued Feb. 18 that the security firm contends documents how APT1 has breached computers in enterprises that conduct business mostly in English, especially in the United States [see map below]. China denies the allegations presented in the report.

According to Mandiant, the data stolen relate to:

Mandiant says it's often difficult to estimate how much data APT1 has stolen during its intrusions because the People's Liberation Army unit deletes the compressed archives after it pilfer them, leaving only trace evidence that is usually overwritten during normal business activities.

Another reason Mandiant cites for the difficulty to determine how data were stolen: Some victims are more intent on assigning resources to restore the security of their network in lieu of investigating the impact of the security breach. 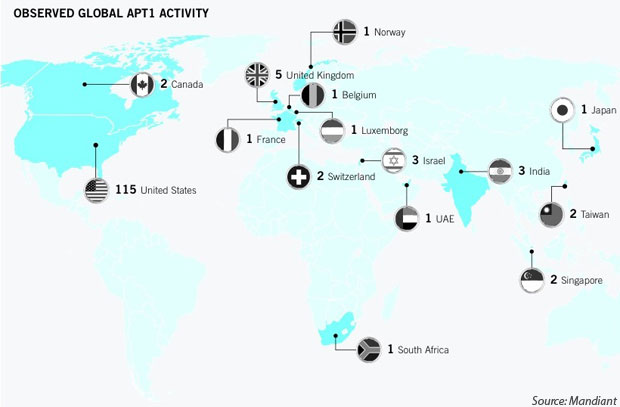 The security firm estimates that the Chinese army unit had stolen as much as 6.5 terabytes of compressed data from a single organization over a 10-month time period and conjectures that APT1 has stolen hundreds of terabytes from its victims.

Mandiant says the report provides evidence linking APT1 to China's 2nd Bureau of the People's Liberation Army General Staff Department's 3rd Department. Other highlights from the report reveal that economic espionage conducted by APT1 since 2006 has been directed against 141 victims across multiple industries, most notably information technology, aerospace, public administration and satellites and telecommunications.

"APT1 is among dozens of threat groups Mandiant tracks around the world and one of more than 20 attributed to China that are engaged in computer intrusion activities," Mandia said in a statement accompanying the report's release. "Given the sheer amount of data this particular group has stolen, we decided it was necessary to arm and prepare as many organizations as possible to prevent additional losses."

"It is time to acknowledge the threat is originating from China, and we wanted to do our part to arm and prepare security professionals to combat the threat effectively," he says in a preface to the report. "The issue of attribution has always been a missing link in the public's understanding of the landscape of APT (advanced persistent threat) cyber-espionage. Without establishing a solid connection to China, there will always be room for observers to dismiss APT actions as uncoordinated, solely criminal in nature, or peripheral to larger national security and global economic concerns."

This article has been revised from an earlier version to reflect Mandiant's contention that APT1 mostly targets enterprises that conduct business in English and not mostly targets companies in English-speaking nation.